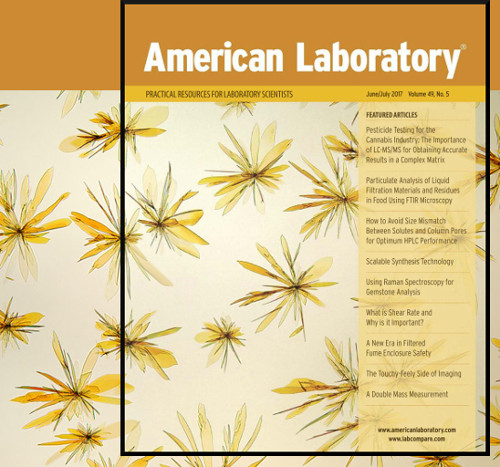 The photomicrograph featured on this month’s cover of American Laboratory was captured by Microtrace research microcopist Kelly Brinsko Beckert. Entitled “Grandma’s Wallpaper,” the image shows the positive result of a microcrystal test for Oxycodone, a DEA Schedule II controlled substance. The microcrystal test is performed by adding a small drop of platinum bromide in a dilute sulfuric acid solution to the sample in question. The resultant crystals can then be viewed through the polarized light microscope. Formation of pleochroic yellow rods and blades, often organized into fans or flowery rosettes, confirms the presence of oxycodone.

The photomicrograph, captured under polarized light at 200x, also won an “Image of Distinction” award in the 2016 Nikon Small World Photomicrography Competition.

More information about this and other microcrystal tests can be found in the Modern Compendium of Microcrystal Tests for Illicit Drugs and Diverted Pharmaceuticals, available as a free PDF from McCrone Research Institute.

Microtrace scientists have taken several photomicrographs that have been displayed on journal covers. In November of 2015, the cover of American Laboratory featured another image by Microtrace microscopist Katie White. Additionally, Katie and senior research microscopist Chris Palenik have both had their photomicrographs appear on the cover of The Microscope Journal (Katie, Chris).