From all of us at Microtrace 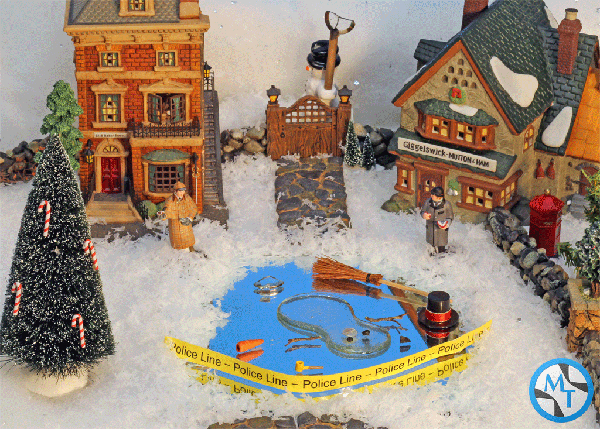 Whenas in silks our snowman goes
Then, then (methinks) how grimly flows
That liquefaction of his clothes.

As we this shocking scene inspect
Clues intimate a disconnect
For two have been here I suspect.

These clues now might we juxtapose:
The victim’s button to a carrot nose,
Fragmented lens glass which unfroze.

Next, when I cast mine eyes and see
Coal, in manifest variety;
Oh how that contrast taketh me.

Bituminous and lignite both
Give our suspicions further growth
And so I proffer this one oath:

My suspect in this crime austere-
A snowman hiding very near.
‘Tis elementary, my dear!

The verse describes Sherlock’s eureka moment as he pieces together his scientific observations and findings with respect to the crime that occurred outside his Baker Street flat one Christmas.  Before him is the liquefied puddle of the victim, a snowman, who had sported a silk hat (Fig. a).  Upon closer inspection, he observes that, while the victim wore a traditional pearlescent button nose (Fig. b), a fragmented carrot nose was left behind by the perpetrator (Fig. c). What’s more, Holmes observes not one, but two types of coal on the frozen pond: the two higher grade bituminous eyes of the victim (Fig. d) and a lower grade lignite eye (Fig. e) lost by the villain.  Together, the carrot nose and solitary lignite eye point to the involvement of a second snowman.  Finally, the fragments of glass on the pond (Fig. f) point unerringly to the means of execution: a convex focusing lens by which the hapless victim was melted away.  In the background, we can still see this now one-eyed, stub-nosed snowman, as he watches on, still clutching the remnants of his weapon.