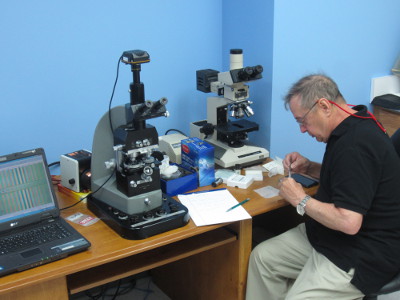 Bob adjusting the Mach Zehnder interference microscope at Microtrace in 2016

It is with sadness that we share news of the passing of our friend and colleague Robert van Kavelaar on Christmas day, December 25th, 2018. Bob will be remembered by his colleagues as one of the few microscopists in the world qualified to operate and interpret the results from the Leitz Mach Zehnder interference microscopes- the epitome of the light microscope with respect to both elegance of result and difficulty of use. He proved his mastery of the technique time and again, delving into the structure of the (then) newly developed aramid fibers (e.g., Nomex and Kevlar) as DuPont worked to implement reliable methods for their commercial manufacture. Bob’s pioneering work on these fibers was ultimately of critical importance in supporting DuPont’s protection of their patents against infringement from Asia and Europe. Attendees at Inter/Micro meetings in the 1980s and 1990s will remember Bob’s cutting-edge presentations, and everyone was happy to see him again when he presented at Inter/Micro 2016. The funeral service and internment (with full military honors) took place on 3 January 2019 at the Delaware Veterans cemetery. He is survived by his wife Claire. We will all miss him greatly.

I had hoped to meet with all of you, Bob’s relatives and other friends today, to speak about him from perhaps a different perspective than those of you who have been lucky enough to spend lots of time with him.  He and I met years ago when he contacted me to help identify what turned out to be an unusual fiber.  I thought it curious that a microscopist from DuPont would be asking for my help to identify a fiber.  When we actually began to speak with each other (This, of course, was in the days when people communicated directly with each other by voice), we learned that we had far more in common and, odd as it may seem to some, became fast friends in a very short period of time.

The roots of our friendship began with our professional interests in and love of microscopy as an analytical tool.  Bob was intimately involved with one of the most rarefied and difficult to understand pinnacles of light microscopy:  quantitative interference microscopy, which is concerned with the measurement of optical path differences, which are gauged on the scale of the wavelength of light.  The results of these determinations lead to specialized data concerning the optical crystallographic constants such as refractive indices and birefringence – topics, which I believe most of you will be happy to learn I will not go into here.  These measurements are extremely difficult to make but also had to be made with extremely high precision and accuracy not only to assure that fibers such as Kevlar (Bob was always getting asked in those days if Kevlar was named after him) and other then still experimental aramid fibers could be effectively and efficiently spun, not only to produce an acceptable product but also meet the intense legal scrutiny that later became necessary to defend the DuPont patents against companies infringing on them in Europe and Asia.  Bob’s knowledge of the optical properties of the DuPont fibers and understanding of the intricacies of both theory and practical technique far surpassed that of the scientists who testified against him in those cases, but in the end were simply outclassed by him.  The true value of Bob’s work in these cases has, I believe, never been written but is a triumph of the importance of real understanding of a subject, combined with mastery of scientific theory coupled with years of experience, resulting in true expertise – take this from me – which is extremely rare.  Typical of Bob, he never made a big deal of any of this.  In this group I’m sure that most, if not all of you, will recognize this modesty as typical of his personality.

We met in person, first at Inter/Micro meetings in Chicago, where we found that we had far more in common than our love of microscopes and what one could do with them.  We were both in the military at the same time, Bob in the Marines in Vietnam and me in Army intelligence (I know an oxymoron) in Germany.  It even came down to the point where it turned out that we shared the same birthday but by one day and based on this for a number of years (back in the days when it was easier to arrange things like this) we always went out together to talk (and talk we did – over a wide range of subjects) over a drink or dinner.

Even though our lives drifted apart over the years, as it turned out we had one of those rare friendships, such that on the occasions when we occasionally did get together, we always seemed to pick up where we last left off.  More recently, the year be for last in fact, we did get together again at Inter/Micro, but this time, we were actually able to spend about a week together out at my lab.  I had the pleasure, not only of seeing Bob again but introducing the legendary microscopist to my young staff of scientists.  If there is a way to present the attached photo you will see Bob in one of the labs here setting up a Mach Zehnder interference microscope – in fact one of those that he had used at DuPont.

Maybe it’s just as well that I was not able to make it to send off Bob with the rest of you.  I know that I would have enjoyed meeting every one of you in person, but I would also have talked a lot longer, since I have many more good things to say about my friend than I can write here.  I hope though that you will give Claire (For the first 20 years of our friendship, I knew her only as “Slim”) the comfort and hug that I cannot provide in person.  We were all really blessed to know this fine man and I, like you, will miss him greatly.  God bless Bob.