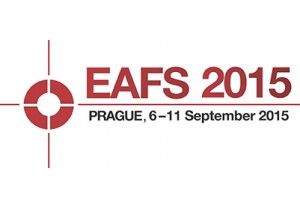 This week Skip Palenik will be giving a talk and chairing a session at the international conference of the European Academy of Forensic Science (EAFS).

On Thursday afternoon, Skip will chair a session on “Forensic inorganic chemistry, trace evidence (including GSR, PBR, paint, glass, and fibers), material analysis of works of art, forensic minerology, soils, and related fields.” In this session, Jack Heitpas, a former Microtrace microscopist, will speak on, “Automated micromorphometry for the characterization of aluminum powders in explosives.”

On Friday morning, Skip will present a paper entitled “Microscopic evidence in the solution of serial crimes: the green river murders.” These murders constitute the largest serial murder case in United States history. At the height of the investigation, it was believed that the Green River killer murdered between 62 and 104 young women.. The final solution of the crimes, which many thought would never be solved, occurred nearly 20 years after the bodies of four young prostitutes were first discovered in and on the banks of the Green River, which runs through the city of Seattle, Washington. This presentation will demonstrate how the analysis of microscopic trace evidence recovered from the remnants of the victims’ clothing, nearly 20 years after the first murders occurred, led to the confessions of Gary Ridgway to the murders of 49 of the victims. The successful solution of this case provides a text book example of the value of microscopic trace evidence in developing investigative leads where no other apparent evidence, including DNA, is present. Finally, the importance of educating both police investigators and young forensic scientists as to the special importance of securing trace evidence for study and analysis in the laboratory for developing investigative leads will be stressed and demonstrated.

2015 marks the 7th gathering of the European Academy of Forensic Science. The conference is being held in Prague from September 6-11.