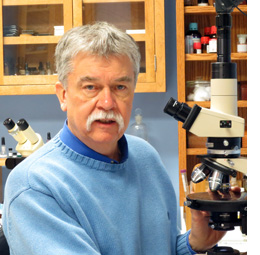 Skip Palenik has had a lifelong fascination with the microscope that started when he received his first instrument at the age of eight. Since then he has devoted himself to increasing his knowledge of analytical microscopy and microchemistry and applying it to the solution of real world problems, especially those of forensic interest. He was fortunate in having worked closely with his mentor, Dr. Walter McCrone, for over thirty years and to have studied forensic microscopy with Dr. Max Frei-Sulzer of Zurich, a disciple of Dr. Edmond Locard of Lyon. Skip has been teaching analytical microscopy to forensic scientists for more than thirty years and has published numerous scientific articles and book chapters on the applications of chemical and forensic microscopy.  He established Microtrace in 1992 to provide a resource for organizations and individuals in need of scientific services involving the analysis of microscopic trace evidence. His special research interests are the identification of single small particles, small amounts of complete unknowns and tracing dust and soil back to their origins.