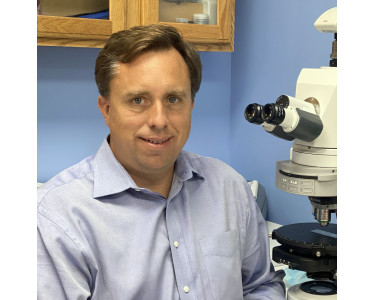 From his earliest memories in his Father’s basement microscopy laboratory, to houseguests from laboratories at Scotland Yard, the Soviet Forensic Service, and many US crime laboratories, the breath of information hidden in scientific clues and the practical value of this information has always fascinated Chris.

With an educational background at the University of Chicago and University of Michigan that spans chemistry, geology, materials science, and nuclear engineering, his formal education culminated in a PhD thesis focused on the world’s only naturally occurring nuclear reactor.  This academic basis was counterbalanced by practical internships at the Bundeskriminalamt in Germany (the German Federal Police Crime Laboratory), the Internal Revenue Service National Forensic Laboratory, and a post-doctoral fellowship at the Federal Bureau of Investigation.  Through this educational background, Chris developed an intimate familiarity with a wide range of materials and microanalytical approaches.

Following his formal education, Chris has had the fortunate opportunity to continually expand his knowledge while applying it to a wide variety of unusual investigations.  With projects that have included capital punishment cases, military court martials, and civil litigation and clients from pharma, food, environmental and nanotechnology industries, he has encountered a range of scientifically fascinating and newsworthy cases.  Some of the more unusual samples have included a holocaust era lamp shade allegedly made of human skin, baseball bats and balls signed by the likes of Joe DiMaggio and “Shoeless Joe” Jackson, materials from unlicensed cosmetic surgeries, and a wide assortment of alleged pills, animal parts, and other miscellanea allegedly encountered during the consumption of food.

The application of microscopy to a variety of unusual questions through a rigorous application of the scientific method provides an elegant link among this seemingly disparate ranges of clients, materials, and fundamental sciences.  The outcomes of these investigations have been accepted in courts, published in peer reviewed journals, and featured in media ranging from the National Geographic channel to NBC’s Today show.   Chris has been invited to present his work around the world, from the Asian Network of Forensic Sciences to INTERPOL.  Chris is a fellow of the American Academy of Forensic Sciences, and serves in appointed positions on the North Carolina Forensic Science Laboratory Advisory board, the National Institute of Justice Forensic Science Standards Organization (OSAC), and the Journal of the American Academy of Forensic Sciences Editorial Board.

Below is a selection of achievements.  A full and current curriculum vitae can be provided upon request.

Selection of Publications and Presentations

Over  100 publications and presentations.

Palenik, C.S. and Diaczuk P. (2013)  Plumbum microraptus: Microscopic indicators of a bullet hole in a synthetic fabric.  Microscope Journal and reprinted in the Journal of the American Society of Trace Evidence Examiners (Volume 4, Issue 2, August 2013).