Visualizing TiO2 and Pigments in Paint and Polymers by Microscopy

Microtrace has conducted a great deal of casework and research on pigments in paint, fibers, and polymers.  Titanium dioxide, in the form of rutile or anatase is interesting and probative for various reasons; however, its size as a pigment is generally near the resolution limit of light microscopy.  It can be visualized using a higher magnification, dry objective or oil immersion, as shown below.  In this transmitted light image taken using oil immersion (objective and condenser), the individual rutile particles can be seen as high contrast dots in a matrix of a pigmented paint flake.  Also visible in this image are particles of a red pigment.  The titanium dioxide particles are visible as the dark, discrete, high contrast particles (due to their high refractive index relative to the matrix). The presence of a red pigment is notable, but more difficult to resolve as discrete particles due to its lower refractive index and smaller size.  While this image does not show a scalebar, the particles visible in this image are around one micrometer or less in size. 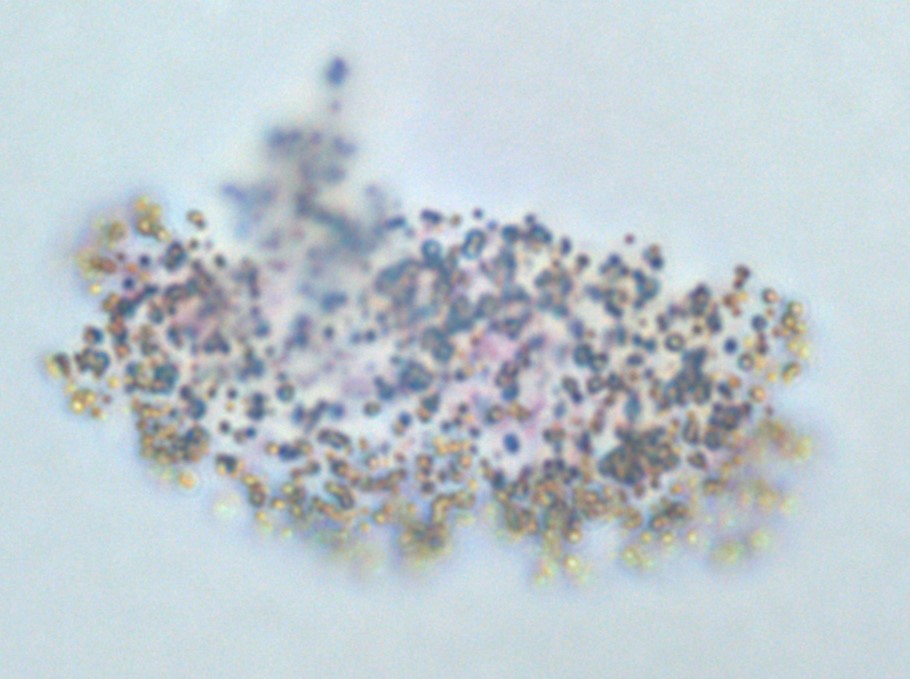 TiO2 and red pigment particles in the matrix of a paint flake as observed by oil immersion microscopy.

These particles can be studied by methods such as Raman spectroscopy and Scanning Electron Microscopy. However, Transmission Electron Microscopy (TEM) provides the clearest view of pigment particles such as rutile and anatase, as well as their morphology.  As shown below, a thin section of a red paint was prepared at a thickness of approximately 100 nm.  In this TEM image, a thin section (~100 nm) of the same red paint (light gray background) is supported by a lacey carbon support film (moderate gray web).  Individual particles of the pigment rutile (a polymorph of titanium dioxide) can be observed as they are distributed in the paint. 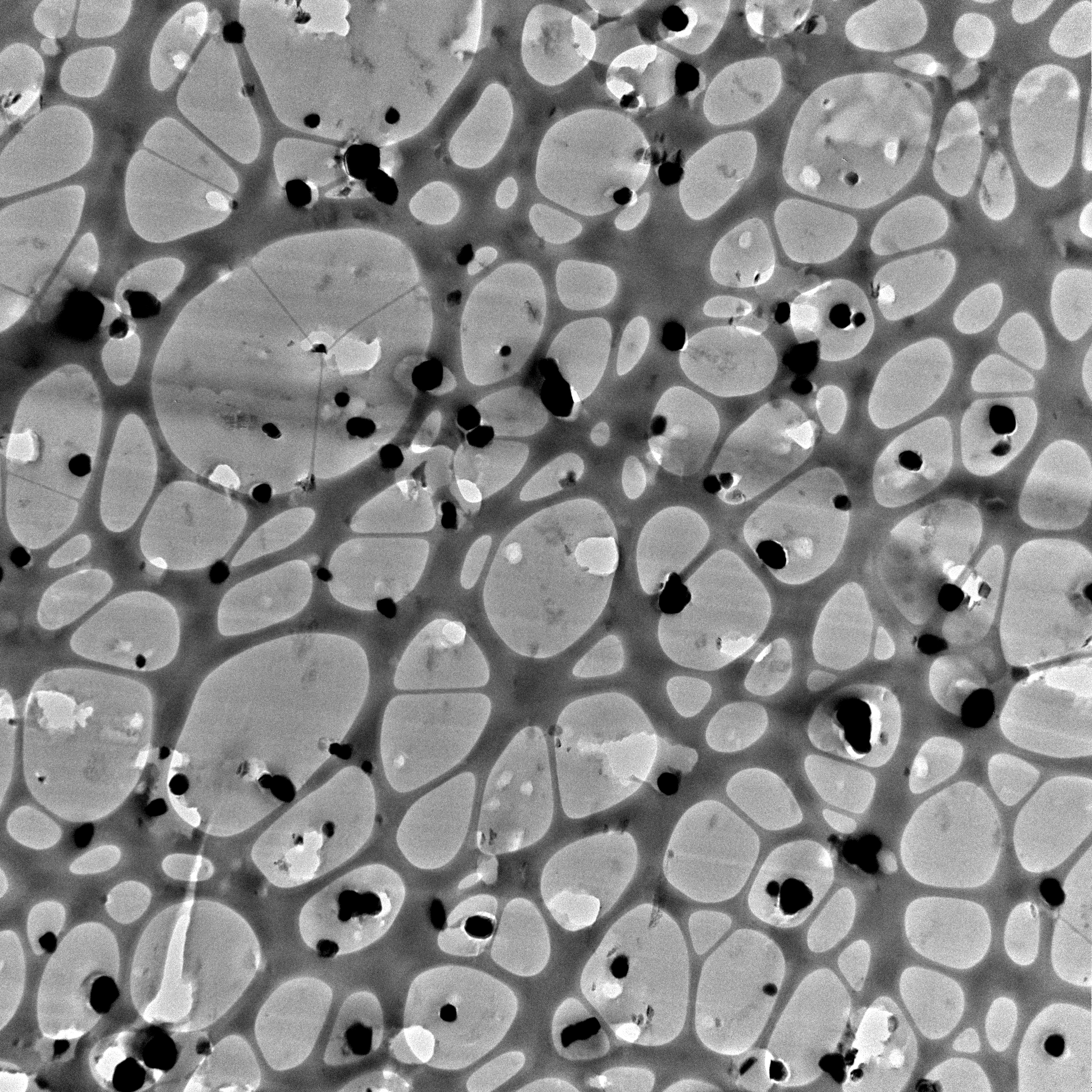 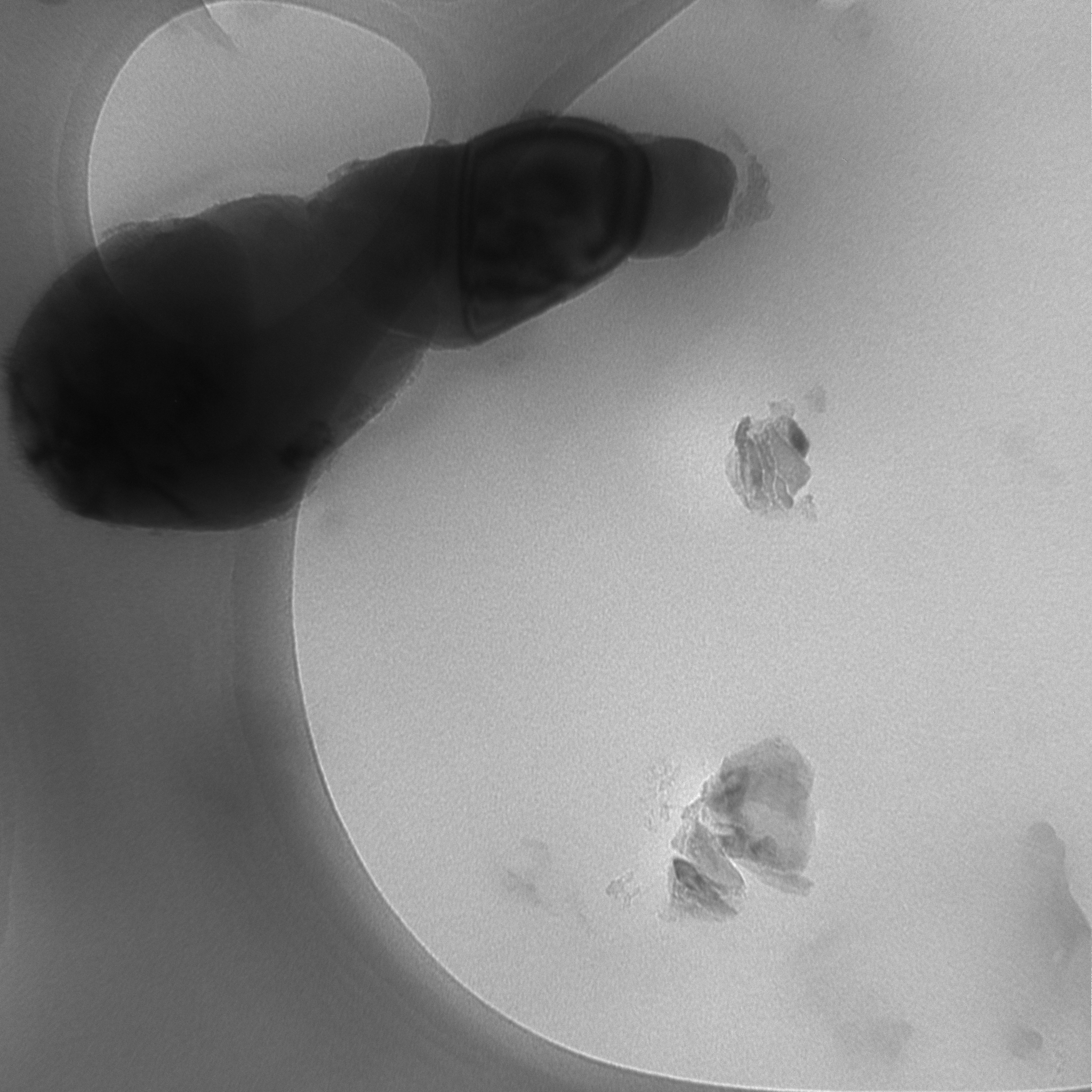 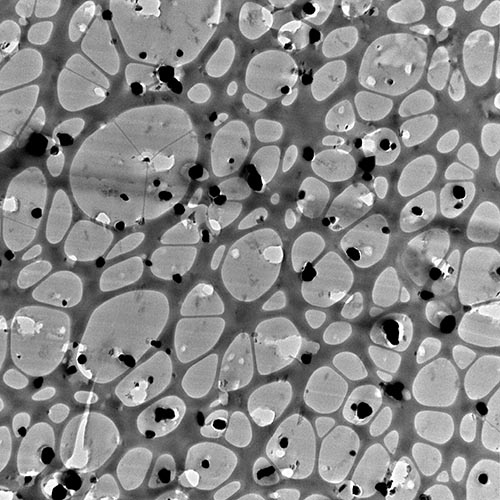 A 100 nm thin section of a paint on a lacey carbon support film showing the distribution of TiO2 and a red pigment.

At higher magnification, the red pigment, which is smaller and less electron dense than the rutile, can also be observed.  In the image below, a clump of undispersed rutile in the paint matrix can be seen in the upper right.  Two particles of the red pigment, which are less dark and finer than the rutile, can be seen in the paint matrix.  In the TEM at Microtrace, particle sizes, distribution, and shape can be studied.  In addition, their composition and structure can also be probed by EDS and by electron diffraction in the TEM. 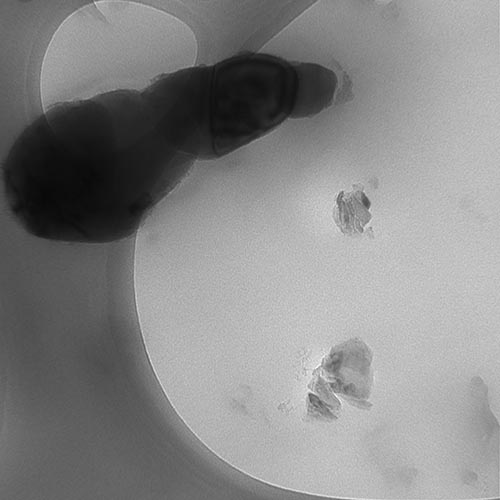 TEM image of a 100 nm thin section of a paint on a lacey carbon support showing a cluster of TiO2 (upper left) and particles of a red pigment.