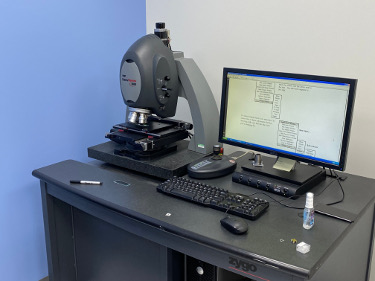 The Scanning White Light Interferometer (SWLI) at Microtrace provides optical 3D profiling of sample surfaces. A white light interferometer is capable of imaging surface inclusions and protrusions down to ~0.5 nanometers resolution. The instrument can analyze a variety of reflective materials, including metals, glass, and plastics. Likewise, it can measure a wide range of profiles- smooth, rough, flat, sloped, stepped.

With its ability to create a topographical map of a sample’s surface and identify minute irregularities in surfaces, the SWLI has applications to many industries. The instrument serves manufacturing industries with stress and failure analysis, product development and component alignment, and quality control. It is also used by the coatings industries to measure the smoothness or roughness of a coated surface. Art forgery and forensic investigations can also benefit from the SWLI. For instance, a document examination might profile an ink line’s topography in order to determine if alteration or overwriting has occurred. 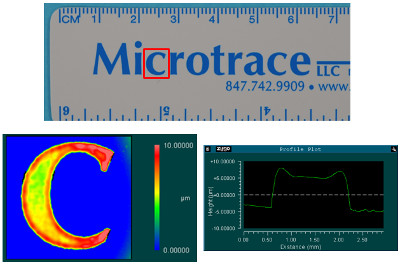 In order to demonstrate the capabilities of the white light interferometry, our scientists analyzed the ‘c’ from the above Microtrace ruler (figure 1). The heat map (lower left) shows a topographical map of the entire letter. The edges reach about 10μm above the background polymer, while the center dips to about half of that. A horizontal cross section across the center of the C shows this data as a profile plot (lower left) with better resolution and the ability to extract a quantitative surface profile. This surface profile analysis at Microtrace demonstrates the sudden rise and fall at the edges of the letter, as well as, the central dip.  Of course, many surface profile questions are conducted at a level of nanometers, rather than micrometers. 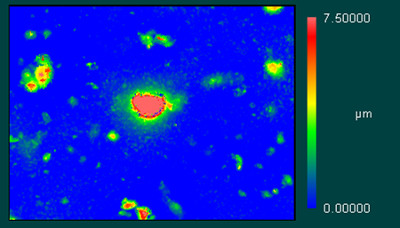 A client approached us in order to understand why their newly developed drug was not functioning properly. Specifically, their polymer film was not dispersing an ingredient evenly across the film. White light interferometry demonstrated that the surface of the film was uneven with “lumps” reaching over 7 μm high (figure 2). The instrument allowed us not only to measure the height of these protrusions, but also their area, volume, and distribution (spacial density).

Further analysis showed that the gel was never fully dissolved before it was cast into a film. The undissolved lumps featured prominently on the resulting non-homogenized film, and created the dispersal problem. 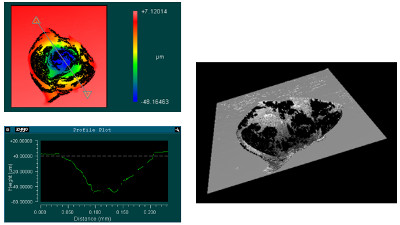 Scanning White Light Interferometer measurements of depth, area, volume, and spacial density of inclusions are also conducted at our laboratory . Figure 3 shows an ablated quartz crystal 3D rendering by SWLI, with its corresponding heat map and a profile plot of a diagonal cross section. 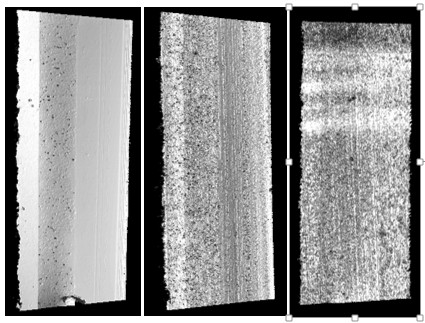 Microtrace analysis by SWLI is also used to characterize, compare, and quantify surface textures and determine their smoothness or roughness using ASTM methods. Figure 4 shows three cross sections of a paint chip that were each cut by a different method- a diamond blade, a glass blade, and a Tungsten-carbide blade. SWLI’s 3D rendering allows us to visually compare the smoothness of the diamond blade cut against the glass and W-carbide blades. Automated software allows us to capture data regarding numbers and density of protrusions and inclusions. We can use this information to, among other things, calculate the roughness or smoothness of a surface by the ASTM standard method (ASTM E1252-98, ASTM STP 1445 and ASTM WK66682). 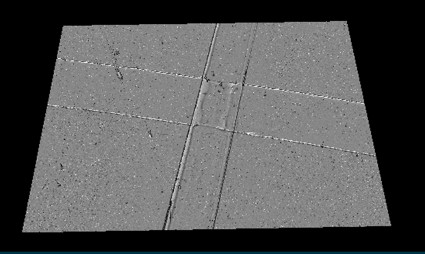 Document examinations often reply on understanding whether a particular passage of writing is original or overwritten in order to alter the original ink pattern. In many cases, the Scanning White Light Interferometer can help illuminate these patterns. Figure 4 shows two crossing ink lines by SWLI. In this case, a simple visual inspection of the image clearly shows that the vertical line was produced after the horizontal line. At the intersection, the crisp, sharp edges of the vertical line can be compared against the blurred, covered, and disappearing edges of the horizontal line.

Capable of measuring profile heights ranging from less than 1 nm up to 20000μm.

For more information about Microtrace’s use interference microscopy, click here.